ABC named the 29-year-old Wake Forest graduate the season 25 lead in June 2020, subsequently revealing that the series received a record number of submissions for contestants. Among the 38 women who had the opportunity to meet Matt was Rachael, a 24-year-old graphic designer from Georgia. While she didn’t receive the coveted first impression rose (Abigail Heringer did), she caught Matt’s eye on night one. (Season 25 of The Bachelor was filmed at Nemacolin Resort in the fall of 2020 and premiered in January.)

“She was beautiful, wow,” he said after she walked out of the limo.

After several group dates, Rachael scored one-on-one time with Matt during the February 1 episode of the show. During the evening portion of the date, the pair revealed they were falling in love with one another.

“Night one, what she chose to use her time with me to speak about was very intentional. And it wasn’t something that wasn’t going to progress our relationship,” Matt said of Rachael on Us Weekly’s “Here for the Right Reasons” podcast on February 2. “And then when I saw on the first group date, and I’m referring to all these instances that aren’t one-on-ones, because that was how our relationship was lived out, you know, I hadn’t had that one-on-one time with her yet. And when I had that day to spend with her and really get to know her better, it just affirmed everything I had already felt.”

While Matt and Rachael were dropping L-bombs on the series, she was making headlines for her past racially insensitive actions, including photos of her at an “Old South”-themed frat party in 2018. The controversy escalated after Chris Harrison asked for fans to have “grace” for Rachael as they navigated the scandal. The Georgia native broke her silence on February 11, two days after the host’s interview and more than one month since she initially came under fire. Rachael’s mother, Kim Kirkconnell, also defended her daughter and hinted at how the situation might affect their potential happy ending.

During The Bachelor: After the Final Rose on Monday, March 15, fans learned that Matt and Rachael called it quits while the show was airing.

Months after getting back together in April 2021, Rachael gave Us Weekly an exclusive update on their romance — and the pressure they feel from Bachelor Nation to get engaged.

“We’re in a great place,” she said that September at New York Fashion Week. “We just needed to take that time away from everyone and really figure everything out, and I think that we were just so sick of the outside noise and we were like, ‘You know what? We need to just put all of that aside and really focus on our relationship and how we feel about each other and nothing else.’ It’s been so incredible.”

Scroll through for a complete timeline of Matt and Rachael’s relationship:

Rachael got visibly emotional after Matt kicked off night one with a prayer. “Everything that he said I felt like I really related to that,” she said through tears.

In her confessional, Rachael added, “I had a feeling that I was going to be, like, infatuated with him, but the fact that he opened that up with a prayer struck a nerve for me. I didn’t expect to feel like this so soon.”

“Rachael, I’m falling in love with you too,” Matt told Rachael on the February 1 episode. “And it is scary to say, but when I’m with you, it just feels right.”

During an interview with Us, Matt opened up about the weight of using the word “love” on the show. “Having not been part of The Bachelorette before I was the Bachelor, I didn’t know the rules and regulations of how to use that word,” he said after the episode aired. “And so, whenever I felt something, I said it. And I only said things that I meant and felt. So, if that got tossed around a few times, it’s because I felt it. And if it doesn’t, then that means that connection hadn’t gotten to that point yet.”

The week after her one-on-one date, Rachael scored a group date rose during the February 15 episode.

“My parents will be so happy to meet you because if I’m happy, they are. I feel like I’ve been searching for what feels like my whole life for this and now I feel like I finally found it,” she gushed on the episode. “But I don’t know if I’m going to get it. The only worry is that I just don’t get you at the end of this.”

He replied: ”Where I’m at with you is, when I’m not around you, I’m thinking about you. And you just make me smile.” 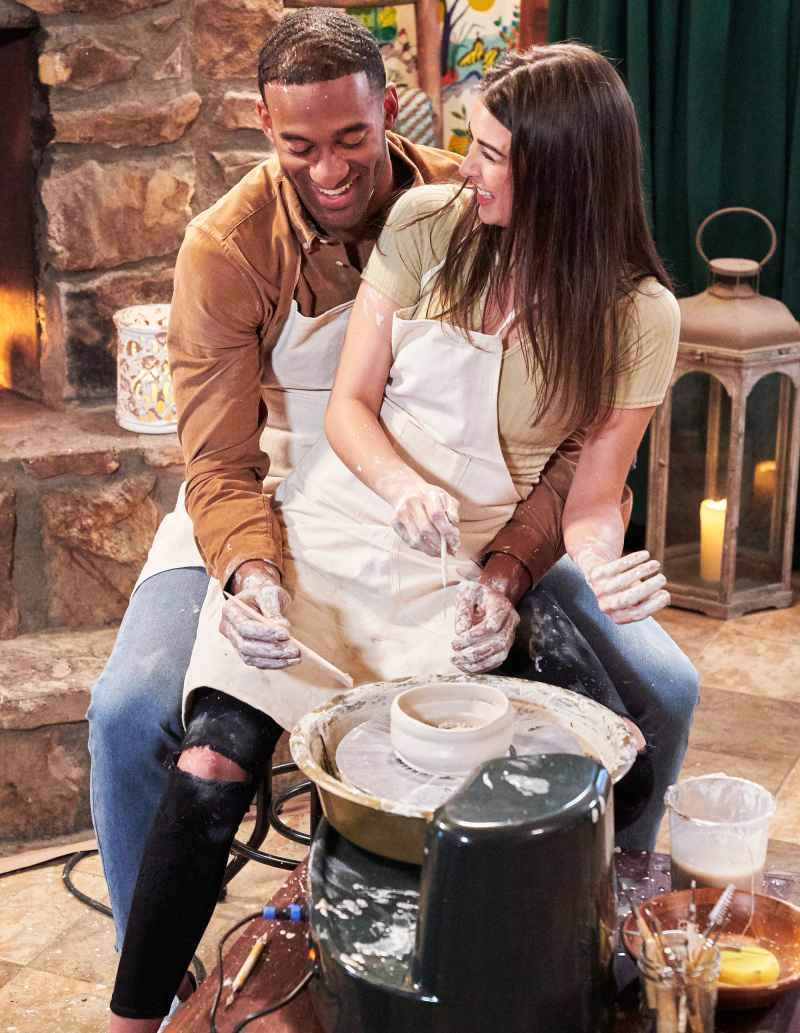 Matt and Rachael affirmed their love for each other during their overnight date, which aired on March 8.

“Where I’m at with you is I’ve fallen in love with you,” Matt said.

She replied, “I’m head over heels for you. I’m completely in love with you.” 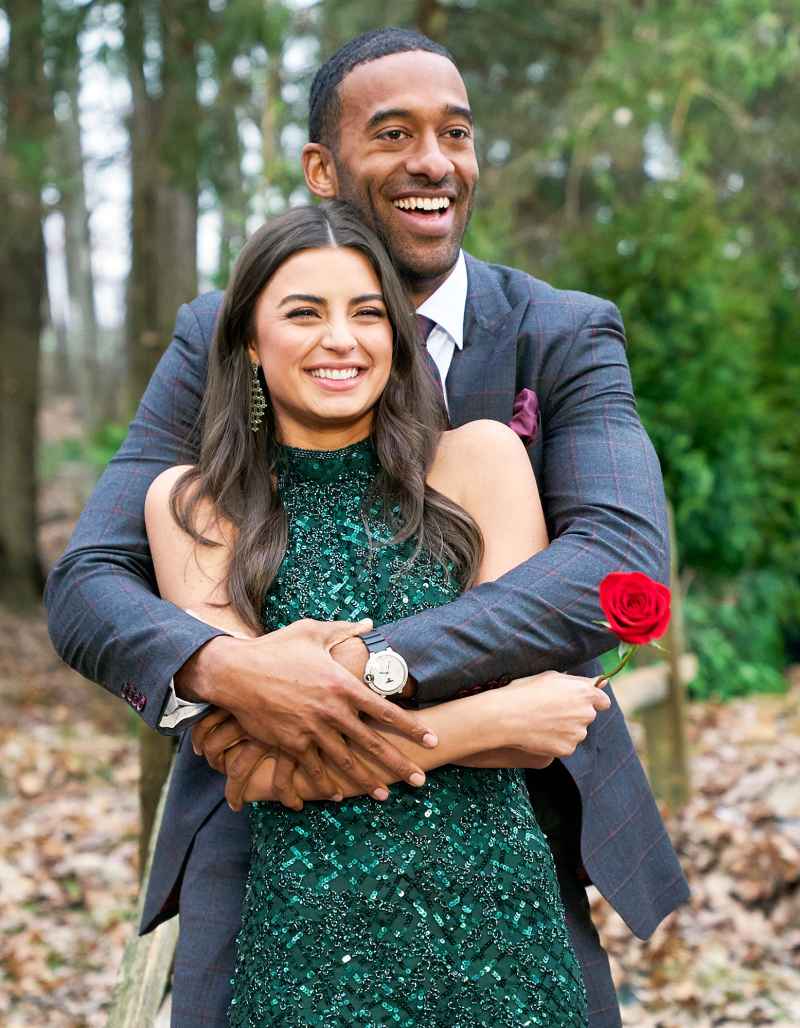 Matt and Rachael left Nemacolin together in November 2020.

“It felt like an extended honeymoon period,” he later revealed on After the Final Rose. “It was super, it was great. Initially, it started out how you would imagine.” 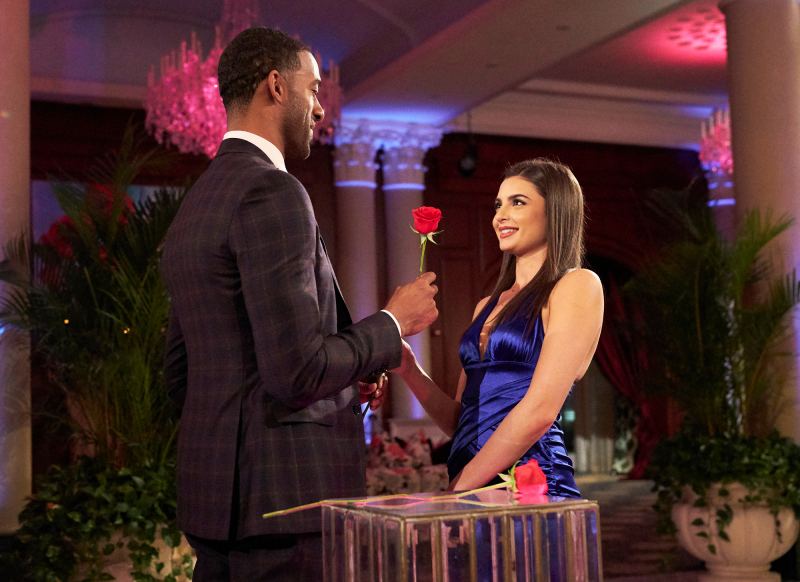 The same day The Bachelor premiered on January 4, 2021, the first allegations against Rachael surfaced. 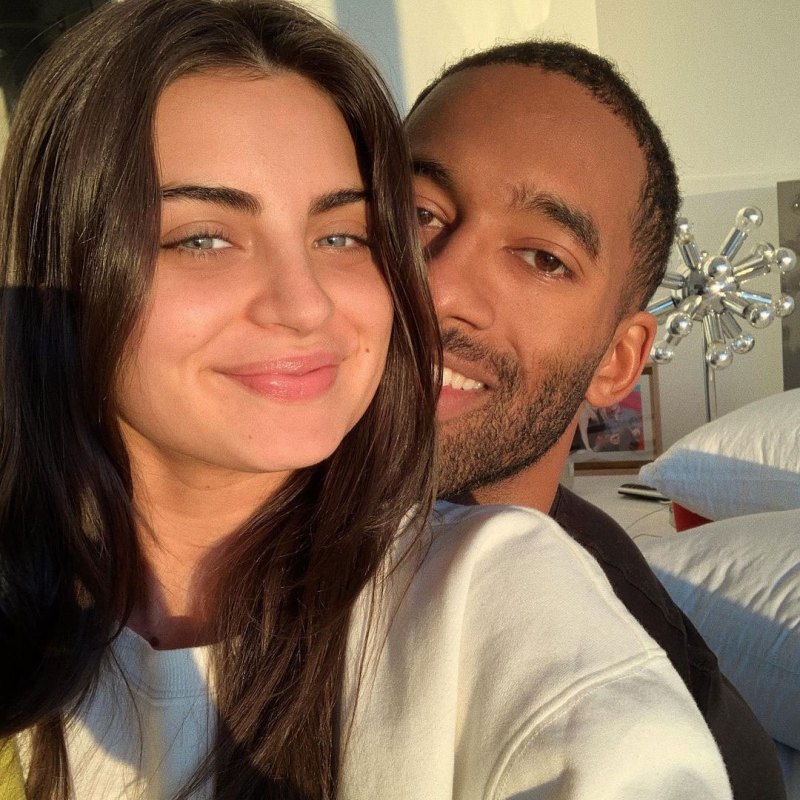 Prior to the photos of Rachael at the controversial frat party resurfacing, she made headlines when a TikTok user accused her of being racist in high school. Screenshots of Instagram photos that Rachael “liked” featuring people smiling in front of Confederate flags then surfaced via social media. Matt was asked about the situation for the first time on February 2. Bachelor’s Matt James and Rachael Kirkconnell

“I have not spoken to anybody since the show ended, but I would say that you have to be really careful about what you are doing on social media,” Matt told Entertainment Tonight. “Rumors are dark and nasty and can ruin people’s lives. So I would give people the benefit of the doubt, and hopefully, she will have her time to speak on that.”